There are a lot of people I admire, for example Leonardo DaVinci. That dude was awesome! Did you know he wrote backwards? Some said it is because he was left-handed and he didn’t want to smear ink on the paper when writing, some say he was dyslexic.

Another guy that impresses the hell out of me is Gaius Julius Caesar. He wasn’t a math and engineering genius like DaVinci. He was a conqueror.

In 47 BC he was a Consul and Roman General, and one of his missions was the Battle of Zela, which he won in a 5-day campaign with half the army that Pharmaces II had.

So “Veni, Vidi, Vici” it is reported to have been said by Caesar when returning from that battle, it translates to “I came, I saw, I conquered” 1.

For me that phrase always gave me goose bumps, like everything is possible if you are smart enough to do it. It is a symbol that makes you trust yourself and go with your instincts (read more about the Battle of Zela to understand why of that).

Because of that, this was my first tattoo: 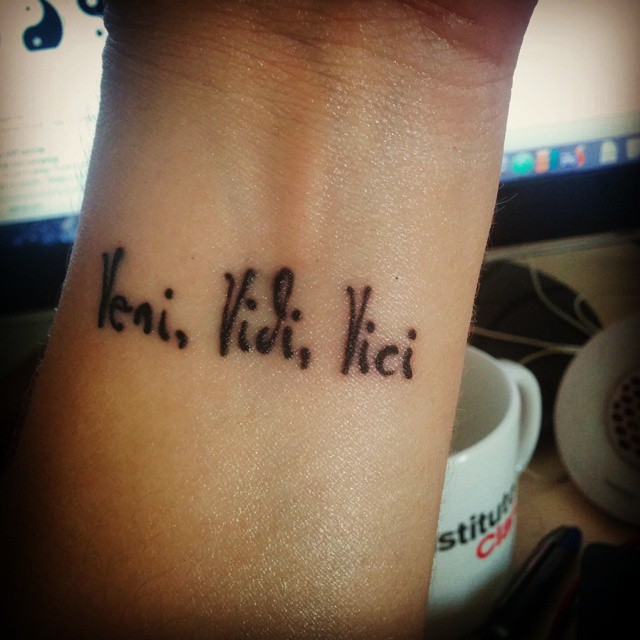 Although impostor syndrome is not an official diagnosis I am sure I suffer from it. The fear of being “discovered as a fake”, is down right scary, to the point of giving me panic attacks. I don’t like routine and being out of my comfort zone shouldn’t be a problem for me, but the second I have the opportunity to do something different, I chicken out.

I made that tattoo to remind myself that I can beat that, that I can conquer.

Some people despite of their personal issues have been kind enough to me to help me, and I’d like to thank them. I don’t know if I can say their names, it is pretty personal and maybe they don’t want to be exposed, but I really appreciate what you have been doing for me. Know that I regard you as the same level of admiration as I regard those two geniuses above. I actually think I regard you even higher.

For the people that are reading this, know they are my anonymous saviors, my Avengers.

1 – Grammatically speaking I remember in school that it was a unique case of a phrase without subject, that is was ugly thing called “Orações coordenadas assindéticas” which I means that are phrases that are not connected by any conjuctive, only by commas. In that case they were only verbs, in the case of the English language it would be literally “Came, Saw, Conquered”, which does not make any sense, because if the verbs were conjugated in the correct way, it would mean to be a set of orders, in another words, it would be in the Imperative.

Your SQL IS NOT JavaScript (neither PHP)

Extending WordPress Dockerfile to use MySQL 5.7 (or 8.0)

Replication from External Primary/Leader into GCP

Generating a mysqldump to import into Google Cloud SQL